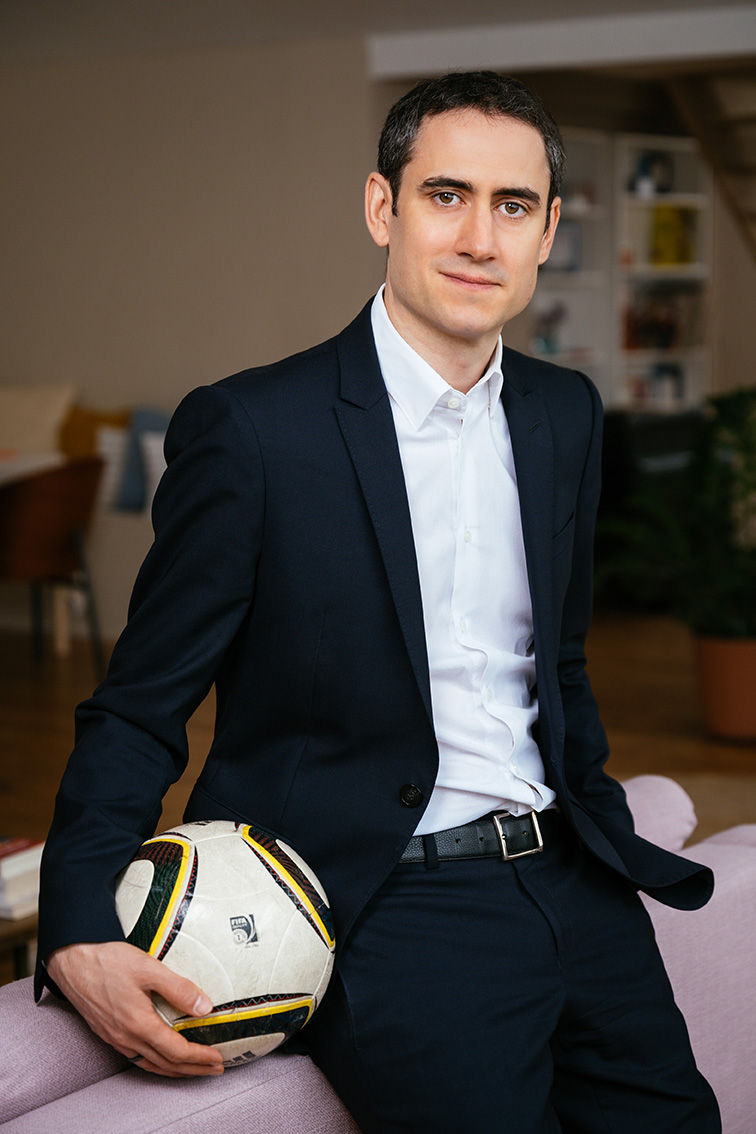 Should you have ever met Pierre Viguier, you must know that his passion for sport in general, and football in particular, is real and longstanding. Here is the story of a boy who, through hard work and perseverance, became a talented lawyer and a key player in our international sports law & arbitration practice.

Why did you choose to study law? How does your story start?

Until I was eleven, I nurtured the dream of becoming a professional football player. In short, as a fan of Paris Saint-Germain, I desired to set the Parc des Princes on fire! I could pretend that a nasty injury destroyed my ambitions at a very early stage. But the truth is that during my first year of high school, my French teacher asked us to write an essay about the job we wanted to do later. I enquired about the career of professional footballers, and I realized that at my age, promising young boys were at the doors of training academies. Instead, I was a substitute for the third team of an unknown club in the southern suburbs of Paris… It was a moment of clarity: I had the motivation, but I clearly lacked the innate talent. So, I resolved to look for an alternative career. As an idealist who is driven by the defense of what we call in France “the widow and the orphan” and the disenfranchised, I decided to become a lawyer. I therefore directed all my studies towards this goal. It was a new dream that this time eventually came true thirteen years later.

And how did you come to arbitration?

It was during a Master 1 course on international trade law given by Professor Daniel Cohen that I heard about arbitration for the first time. A procedure entirely organized by the parties, who can choose the applicable law, the language, the location of the hearings in full freedom. That word, « freedom », really resonated: I knew that this was what I wanted to do. Therefore, in 2009, after having completed my legal education in France and passed the Paris Bar exam, I applied and got accepted to a specific program in international arbitration in Geneva: the Master in International Dispute Settlement (MIDS). This program, which was directed at the time by Professor Gabrielle Kaufmann-Kohler, covers every aspect of dispute settlement, including commercial and investment arbitration. In 2010, when I graduated from the MIDS, I started looking for a job. The downturn in the global economy after the 2008 financial crisis meant that most firms I applied to were not hiring. But being very tenacious, I persevered with the job hunt with encouragement received from my family and close friends.

How did you join Gaillard Banifatemi Shelbaya Disputes?

In December 2011, I was invited for an interview with Yas Banifatemi for a position as an intern in the International Arbitration group of Shearman & Sterling. I prepared thoroughly as if it were for a relegation play-off match. While the interview itself was challenging and stressful, I enjoyed the process as it allowed me to showcase my expertise, and discuss the technical aspects of international arbitration law. I left with a feeling of deep satisfaction, which was quickly replaced with anguish about the outcome. The day after, like a Christmas gift, Yas offered me a 7-month traineeship from June 2012. I really relished my internship. I had to work hard, but I found the work to be immensely gratifying and tried to make the most of my 7 months. As my internship neared an end, I decided to apply for an associate position. Late Professor Emmanuel Gaillard and Yas acknowledged my hard work and offered me my “first professional contract”. Given the difficulty of getting my foot in the door of an international arbitration team’s locker room, I regard this associate offer as my first main professional achievement. Four years later, I celebrated my first landmark success with the team.

What was the case about?

When I assumed my position as an associate in the beginning of 2013, I joined the team representing the Republic of Algeria in two major telecoms disputes, with an amount at stake in excess of USD 20 billion. The first case (Orascom Telecom Holding v. Algeria) was an UNCITRAL arbitration brought by an Egyptian company against Algeria. The dispute related to alleged breaches of the Algeria-Egypt BIT in relation to the operation of a mobile telephone company in Algeria. At the same time, the Luxembourg parent company of the Egyptian company lodged a parallel ICSID arbitration against Algeria over the same dispute but relying on the Algeria-Belgium-Luxembourg BIT (Orascom TMT Investments v. Algeria). Although the first case settled in 2014, the claimant in the second case maintained that the settlement had no impact on such parallel, distinct proceedings. I was involved in the second case from its inception, which was during my internship. In 2014, having raised objections to the jurisdiction of the tribunal and the admissibility of the claimant’s claims, we obtained a first significant victory when the tribunal granted Algeria’s application for the bifurcation of the proceedings into a jurisdictional phase and a merits phase. In 2017, after years of hard fought proceedings, the arbitral tribunal dismissed in its entirety the claim brought by the Luxembourg-based company against our client. That award has been widely recognised as a landmark decision bound to become “a reference in its consideration of investment arbitration as a system”. This success, which resulted from the collective hard work of talented and devoted teammates, was really special to me. I was so thrilled by our success that I felt like we had won the UEFA Champions League! A few weeks after the award was rendered, the claimant submitted an application for partial annulment of this award. We continued to represent Algeria in the annulment proceedings. In 2020, an ICSID ad hoc committee eventually dismissed the annulment request, which put an end to this long-running case. It was a fantastic achievement which, for me, was akin to winning the FIFA World Cup!

In parallel, have you continued to nourish your passion for sport?

Yes, of course! I follow all major sporting events, especially those related to football. Before the emergence of the COVID-19 pandemic, my father and I had season tickets at the Parc des Princes for almost 20 years. In 2012, while I was spending four months in London in order to improve my English skills, I attended a match in nine of the football clubs (Charlton, West Ham, Millwall, Tottenham, Queen Park Rangers, Arsenal, Fulham, Crystal Palace and Chelsea). Later, I attended 16 matches of the UEFA Euro 2016 in France (including the opening and final matches), while working full-time. Recently, I started attending European derbies (Madrid, Rome, Istanbul, Manchester, Glasgow, Seville and Dortmund). I also had the opportunity to attend a match between Liverpool and Manchester City at Anfield, and to sing the famous “You’ll never walk alone” with Reds fans. This song has a real meaning to me. I identify with the team spirit and competition that drives team members to excel together. These are values I share and which I apply in my day-to-day life, especially in the successful resolution of large-scale cases.

How would you define the spirit of Gaillard Banifatemi Shelbaya Disputes?

The firm’s motto is “The art of arbitration”, that’s really what it is. Everything is done on a human scale with a lot of intelligence, not as part of a chain. Each case is dealt with individually. Each case has its own specificity, and we present it accordingly. We do things that no one else does. Everything matters. We check the smallest details, and apply an exacting level of excellence to the substance as well as to the form: it must all be perfect. This is the legacy of Emmanuel and also one of Yas’ teachings: form and substance cannot and should not be dissociated. Above all, with all lawyers and staff members, we are teammates taking care of each other. To work here is to play with the best team in the world. It is an honor for me to be part of it. I regard my evolution within the team and the increased trust placed in me by Emmanuel and Yas, as well as other partners, as one of the principal achievements of my career.

What’s next for you?

After more than six years as an associate practicing international arbitration, I have decided to embark on a new challenge: to combine my passion for sport together with my calling as a dispute resolution lawyer. In 2019, in parallel with my job, I attended the Diplôme d’université (DU) in Sports law at the University Paris-Est Créteil, that I have graduated with the highest honours. Meanwhile, I have been selected for the UEFA Football Law Programme, that I have graduated in 2021, also with the best distinction. These degrees equipped me with the required knowledge and skills to pursue my career in the sports industry and to eventually become an expert in football law. I am also hoping to put my sports law skills to use in our client work. Since then, Yas – who I share my passion for football with – and I have been developing our firm’s international sports law & arbitration practice. I really appreciate the support that my teammates are giving to my new dream.

Interview by Valentine Faure on November 23 2021